In this example we show how QUA is used to efficiently run variational quantum algorithms by demonstrating a concrete implementation of the QAOA algorithm. This algorithm was introduced in 2014 by Edward Farhi, Jeffrey Goldstone and Sam Gutmann (http://arxiv.org/abs/1411.4028). The problem considered here, is the traditional one for this algorithm: the MaxCut problem on a graph containing 4 nodes.

Quantum computers carry promises of solving computational problems that are today known as intractable when trying to address them using classical computation. However, the development of such devices implies multiple technical challenges that currently limit the potentiality of what one can actually hope to solve with those machines.

Today, we are at a stage that is commonly named the Noisy Intermediate Scale Quantum (or NISQ) era, which is characterized by the fact that we have between 5 and 100 qubits to play with, and which are subject to noise sources leading to decoherence effects. A significant field of research associated to this stage is the investigation of potential uses that it may already offer in terms of use for solving computationally costly problems. One of the most promising algorithm that has been elaborated in this framework is the Quantum Approximate Optimization Algorithm (QAOA). This algorithm's purpose is to provide an approximation of the solution of a combinatorial optimization problem, which usually corresponds to a NP-hard problem.

We will investigate the key components of QAOA by translating it into a QUA framework, using real-time capabilities of the OPX.

The class of problems QAOA is meant to solve is gathered in the notion of binary combinatorial optimization. This type of optimization consists in finding an optimal solution among a discrete finite set of instances that minimize or maximize a cost function. The term binary states that the instances are bit strings. The formalization of those kinds of problems is gathered into the notion of Quadratic Unconstrained Binary Optimization (QUBO). The QUBO can be defined as :

where C:{0,1}n→R is the targeted cost function to be either minimized or maximized depending on the problem considered, over a set of bit strings instances x∈{0,1}n,n∈N. Q is here a square matrix with real constant coefficients, which is commonly assumed to be either symmetric or upper triangular without any loss of generality.

Let us present now one example of those QUBO by introducing the Maximum Cut problem. Given an undirected graph G(V,E) with a vertex set V and an edge set E, the Max Cut problem seeks to partition V into two sets such that the number of edges between the two sets (considered to be severed by the cut), is a large as possible. The transposition to the QUBO formalism can be done if one assigns to each vertex the value 0 or 1 whether it is respectively in one or the other set, i.e xj​=1 for vertex j if the latter belongs to one side of the partition and xj​=0 if it belongs to the other. Doing so, one wants to know if the edge (i,j) connecting vertices i and j do cross the cut. This is possible only when the two vertices at the endpoints of this edge are in the two different sets of the partition. This means that the quantity xi​+xj​−2xi​xj​=1 if and only if xi​=xj​, that is when the edge is crossing the cut. If the edge is not in the cut, the expression above trivially yields 0 regardless of the values of xi​ & xj​ as long as they are identical. This quantity is a perfect example of what defines a cost function for the QUBO associated to the MaxCut problem. Finally the QUBO instance coming from the MaxCut problem is :

This last expression allows us to make an assimilation between variables xi​ and classical spin variables in physics usually used to describe interaction models. In fact, one can see the QUBO as a Hamiltonian characterizing spin interactions according to the connectivity of the graph G, with equal weights, or coupling constants in the frame of physics, for all edges.

1.2 From QUBO to Hamiltonian formulation : building the input of the QAOA#

We have now stated explicitly the problem to solve. In order to use the advantage of the quantum computer, one has to investigate the aforementioned assimilation with physical spin systems in order to provide a relevant framework to this latter.

In fact, the QUBO presented above underlines a structure similar to a classical Hamiltonian describing a series of 2-level systems, which is exactly the format we are prepared to work with quantum computers which rely on quantum bits. In order to quantize the classical spin Hamiltonian derived in last equation, one sets up a Hilbert space H={∣0⟩,∣1⟩}⊗n (n=∣V∣≡ # of nodes in G) and performs the following transformation :

xi​⟶21−Z^i​​for i∈V with Z^i​=σ^z(i)​ is the Pauli-Z operator acting on spin i and leaving all other spins untouched, i.e a tensor product of the Pauli Z operator for spin i with identities for all other qubits).

Making the substitution in previous equation, one finally introduces the corresponding cost Hamiltonian H^C​ for the MaxCut problem as : H^C​=∑(i,j)∈E​21−Z^i​Z^j​​

Two remarks regarding this Hamiltonian :

We now present the outline of the algorithm and discuss its range of validity. As it was said in previous section, QAOA relies on the simulation of a quantum system by performing time evolution under a computed Hamiltonian. In fact, it intends to mimic in a very approximate manner the evolution of a system characterized by the following time dependent Hamiltonian :

with H^B​=∑i=1n​X^i​=∑i=1n​σ^x(i)​, commonly named the "mixing" or "mixer" Hamiltonian, and T being a characteristic time for the system.

We then introduce the two unitary gates that constitute what is sometimes called a QAOA "adiabatic evolution block" when considering the product of those two :

Here, the angles γ and β are parameters determined using a classical optimization procedure with respect to the expectation value of the cost Hamiltonian over the QAOA trial state presented below. Notice that due to the action of these two unitaries, γ can be chosen arbitrarily in the domain [0,2π], whereas β can be chosen in the domain [0,π].

Recalling that H^C​=∑x∈{0,1}n​C(x)∣x⟩⟨x∣, the expectation value is written :

This implies that retrieving this expectation value can be done easily by sampling in the computational basis the QAOA trial state and weight the obtained distribution by evaluating the cost function on all the bit strings that come as outputs of the computation. 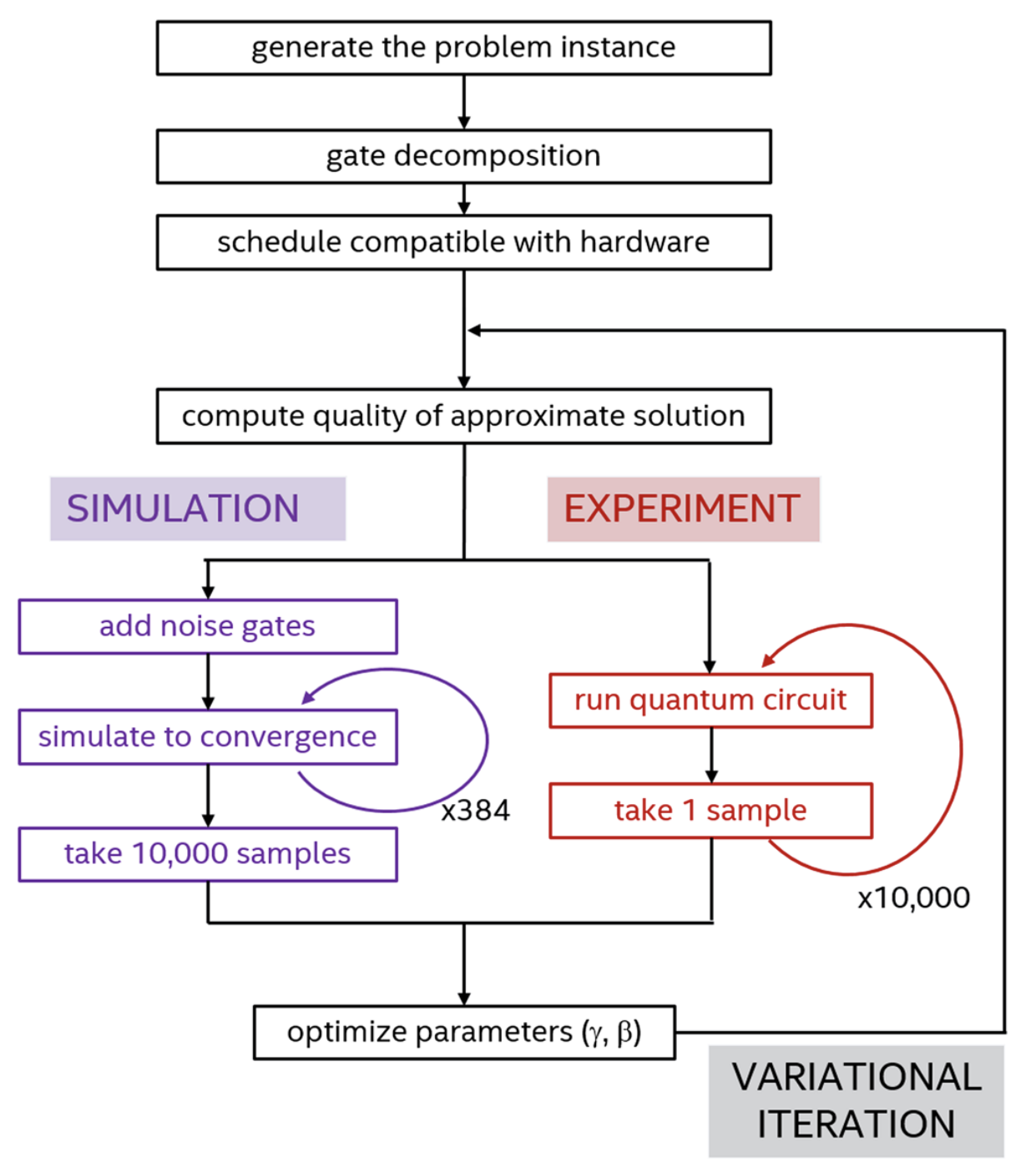 3.2 Global variables of the Python code#

There are few global variables introduced in the main script that uses full OPX's abilities (named QAOA_MaxCut_QUA_IO_usage.py), callable in every function defined to run QAOA:

3.3 The usual structure of QAOA#

Usually, one would initialize a classical optimizer and make successive calls to a new QUA program that would run a parametrized quantum circuit on the hardware.

This solution, despite being relatively simple, is not efficient in terms of communications between the OPXs and the servers. In fact, launching a new program at each iteration (each program differs only by the values of the circuit parameters) involves a new compilation whereas the program itself carries the same structure all along.

To avoid the launch of a different QUA program each time we need to call the quantum computer, we use a slightly different protocol, which consists of defining a single QUA program, interacting continuously with the classical computations necessary to produce the final result of QAOA. This is the improved and specific version of QAOA implemented in the script QAOA_MaxCut_QUA_IO_usage.py.

The QUA program consists of an infinite_loop. Each iteration within this loop is a run of N_{shots} QAOA quantum circuits, that are associated to one particular parameter set.

Between two iterations, the QUA program is paused, waiting for the client PC to call the Python function encode_angles_in_IO(), which sends to the Quantum Machine instance the parameter set to be used to run the next quantum circuit sequence, using the two input/output (IO) variables of the Quantum Machine. It is in this function that the job is resumed (after setting through IO variables the new parameter set), so that the program can compute the quantum circuit and compute in real time the associated expectation value, returned to the client PC via the stream_processing.

The QAOA outline is embedded in the call of one general Python function named result_optimization(). This function returns lists of optimized_angles, and the associated expectation value for the provided parameters provided as global variables in the script.

This global function generates a set of initial random parameters, as well as a set of boundaries for each of those, to be fed to a classical optimizer.

The latter optimizer can either be chosen among the ones available in scipy library (https://docs.scipy.org/doc/scipy/reference/generated/scipy.optimize.minimize.html), or the SPSA algorithm for classical optimization loop (https://www.jhuapl.edu/SPSA/PDF-SPSA/Spall_An_Overview.PDF). The optimizer uses the Python function quantum_avg_computation() to retrieve the result of the evaluation of the expectation value (which is the cost function to be maximized by the optimizer).

The heart of the whole script is the QUA program, which is, as mentioned before, an infinite_loop running a pulse sequence dependent of the angle parameters initialized using the IO values of the Quantum Machine.

Within the infinite_loop stands a for_ loop, meant to reproduce the same quantum circuit dedicated to the preparation of the QAOA trial state N_{shots} times.